Several people have sent me emails and messages now that Hundreds is out, ranging from “reminds me of Filler” to “dude, they cloned your game” to “it even looks like Filler.” I’ve been casually following its development, so I finally downloaded it over the weekend and gave it a play.

My thoughts generally fall along two lines–an analysis of the game as a game and its similarities to Filler, and my thoughts on the game as indie theater (is that a thing?).

In general, though, I like Hundreds. Quite a bit. It’s pretty, it’s hard, and I clearly like the mechanics.

To be honest, Filler is barely a game. I read an article on a new physics engine for Flash back in the fall of 2007 (APE – Actionscript Physics Engine), downloaded it, and started playing with it. I wanted to see how the circle particles interacted with each other and how many it could handle, so I made a little thing that let me mouse down to start growing a circle particle and release to drop it.

Something in that toy sparked a memory of Jezzball from years ago, and within an hour I had Filler more or less running in its final form. I refined it a little over the next couple of months (instead of growing the radius linearly, the balls “inflate” proportionally to their area/”volume” instead–they grow quickly at first and then slow down), but the shipped version was basically that prototype with some menus and ads.

Hundreds uses that same mechanic–inflating a ball–but to different purpose. Where Filler was an arcade game with a neverending level progression, Hundreds is a puzzle game with specific, authored puzzles. This works really well for the inflation mechanic, as it solves the one major problem I never really solved with Filler–lots of particles leads to lots of collisions which leads to slowdown. By introducing a finite number of particles in each level, the lag issue goes away entirely.

Hundreds also introduces many new types of particles where Filler had only the inflation-balls and the bouncing pop-balls. Most of the particles are pretty neat (I like the hockey pucks that you can slide around, but don’t much care for the chained-together-balls). For me so far (about 60 puzzles in), the puzzles generally fall into two categories: acrobatics and patience. In the acrobatic levels, there’s usually some sort of dexterous action required–batting a razor particle through a small opening, moving the pucks around to block razor particles, using two-finger controls to make quick arrangements. In the patience levels, it’s usually a matter of slow scanning, waiting for an opening and deftly inflating just a little. The former feel like totally new puzzles to me, but no matter the particle complexity the patience levels end up feeling just like Filler to me.

I like Filler, and I like that same feeling in Hundreds. I certainly don’t own the inflation mechanic or even the combination of patience and inflation. I like the mechanic, so I actually wouldn’t mind seeing more games that use it. Over the years I’ve sketched/prototyped out a few such games that I’ve never gotten around to making:

In terms of art style, Filler doesn’t really have one. 0×555555 isn’t an art style, it’s just a color of gray that I like. The original Filler is minimalist in style because I wrote in entirely in code and didn’t own Photoshop or Flash at the time (which I used profits from Filler to buy). Filler 2 isn’t really any different than Filler (other than the challenges) — it’s more of a “here’s what it would have looked like if I’d had the resources the first time around.” I think Hundreds is a bit obtuse in places (I thought the game was broken on the first frozen particle), but in generally I really dig the colors and design aesthetic.

So now that I’ve established that I like Hundreds… I don’t think it’s worth $2.99. “Worth” is a really strange word, though–something is worth whatever someone is willing to pay for it, and clearly people are willing to pay $2.99 for Hundreds.

But they’re not really paying $2.99 for the game Hundreds. They’re paying for a ticket to the indie theater.

Adam Saltsman (Canabalt, Old Spice Saves the World) and Greg Wohlwend (Solipskier, Gasketball) are fairly well known in the indie game scene, and they’ve done a great job stirring up attention before the release of Hundreds. Buying the game achieves two goals–it gets you the game Hundreds and it acts as a vote of support for its creators to keep doing what they’re doing. In that sense, this is another form of Kickstarter. We want there to be successful indie developers so that we have something to strive for, and supporting games like Hundreds lets us tag along for that ride and keep our own dreams alive. In that sense, it’s absolutely worth paying $2.99 for.

But tweets like this are probably a disservice to aspiring game developers: 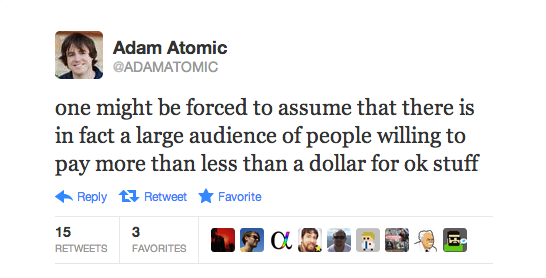 This exact same game by an unknown at $2.99 would be a disaster. Probably even at $0.99. By building a large social and media following and hyping its release well ahead of the launch day, they’ve managed to do something that most indies can’t–widespread press coverage, Apple featuring, and enough initial downloads to launch into the Top 10.

The message that’s being sold in the media is simple: “build a high quality original game and you can command a higher price point and be successful.” But I think Hundreds is more of a marketing success than a truly innovative and original game (not that it can’t be all three–I just think if you’re going to hold it up on a pedestal the most interesting piece is the marketing, by far). Certainly, the game could’ve been a dud and wasted all the hype leading up to its launch. A more accurate story might be “build a large internet following and you can successfully sell content to them (see Louis C.K.).” Game developers should always strive to build good games, but the takeaway from Hundreds should be how to launch a successful game and not necessarily how to design/develop a successful game.

I’m curious to see what will happen when the price ratchets up to $4.99 on the January 10th. I think it may be able to hold its chart position on tablets, but will probably drop like a stone on smaller devices. Which is actually kind of a shame, because I do think it’s a good game.