Filler for the iPhone, ScoreCaching, and Filler 2 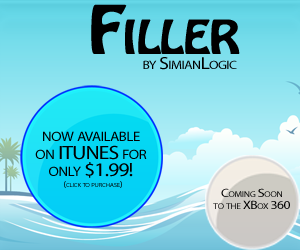 Filler for the iPhone

At long last, Filler is now available on iTunes (you can see my little splash page + iTunes link here) for $1.99. I’ve never outsourced anything before, so it was a bit of a learning experience. I ended up working very closely with the team at ChaYoWo–they’re probably happier to be rid of my long bug reports than they are to actually launch the game (I kid). I’m very satisfied with the final product–even if it doesn’t sell a single copy, there’s a certain joy in being able to play my game wherever I go now. There are a couple of interesting things that happened during the development of the iPhone version.

The first thing I usually hear when people see I’m working on an iPhone version is that I should make it tilt-enabled so you can move the balls around. The problem is… that makes the game stupid easy. It’s not really that hard of a game to begin with (but man is it good to kill 5 minutes while you’re waiting for a bus…), so adding in more mechanics to simplify things just seemed like the wrong direction. Another idea I had was to use the tilt to move around the cursor, and have a button for making filler balls. We actually coded this one up, but… uh… it was terrible. In the end we decided not to use tilt and to keep the gameplay closer to the original Flash version.

One thing I noticed while playing early builds (which I also noticed while playing various clones that are already on sale) is that your fingers really do get in the way of dragging the Filler balls around while they inflate. Most of the strategies for the Flash version involve creating balls near the top of the screen and then using them as shields while they fall. “Finger-blockage” is at its worst when your finger is at the top of the screen, though, greatly diminishing the usefulness of those strategies. While playing those early builds, I did something radical: turned my iPhone upside down. Success! Sure, the balls are floating up instead of falling down–but man it was great to see the whole screen. Asking players to flip their phones upside down is just silly, though, so I did the sensible thing and reversed gravity.

ScoreCachingWhile the ChaYoWo guys were coding the app to my demanding specs, I got to work on another integral piece: ScoreCaching. Most of the iPhone games I’ve played with online leaderboards do just that–global online leaderboards. I wanted a little more than that, so I figured I might as well build it myself. ScoreCaching combines the idea of online leaderboards with geographic location (think Geocaching). Instead of comparing your scores to everyone in the world, why not compare your scores against everyone nearby? Even better, why not leave your scores behind as a mark of your achievement? Just as people used to line up at arcade boxes with the hopes of leaving their initials in the number one spot, ScoreCaching will (eventually) allow players to mark specific places. What’s your high score for the Golden Gate Bridge? What about Times Square? How about the pub down the street? Those features are a little ways out still, but for now you can compare your scores with your friends and those around you.

When Shockwave offered to sponsor Filler 2 as a three-month exclusive, it seemd as if the stars were aligning perfectly. That would give me extra time to finish up the iPhone version, ScoreCaching, and the XBox Community Games version (whoops!). I didn’t quite finish the XBox version (though I did write a hell of a lot of reviews over at Worth the Points), but Shockwave’s exclusive is up and now the rest of the internet can finally enjoy Filler 2. Kongregate, the totally-kick-ass sponsor of the original Filler, is reprising its role for the second go-around. You can play it over on Kongregate here or play it on my site with the link on the sidebar–I’ll start spreading it around the rest of the net sometime next week. If you run a flash portal, feel free to snag the SWF off my site (the one on Kong is site-locked until I verify it’s totally bug-free). If you’d like to license the game for your site (ad-free), drop me a line at learnyourabcs@gmail.com.

On top of everything else, I’m also one of the developers in Mochi’s Brave and the Bold Contest. A $4k (minimum) payout is okay, but let’s get something straight–it’s freakin Batman. I watched the original Batman cartoon every day for years as a kid (I was a Marvel kid when it came to comics, but the Batman cartoon was awesome). Getting to develop an original game concept with one of my favorite characters–that’s a sweet deal. I’ve also got a handful of other finished prototypes in the pipe that are currently on hold until I can clear some of this development logjam.

As always, stay tuned to this space for interesting facts and figures on how everything is doing.