This was originally posted on the MochiLand blog in February of 2008, but I resurrected it off of the Internet Archive while digging up some of my old posts. 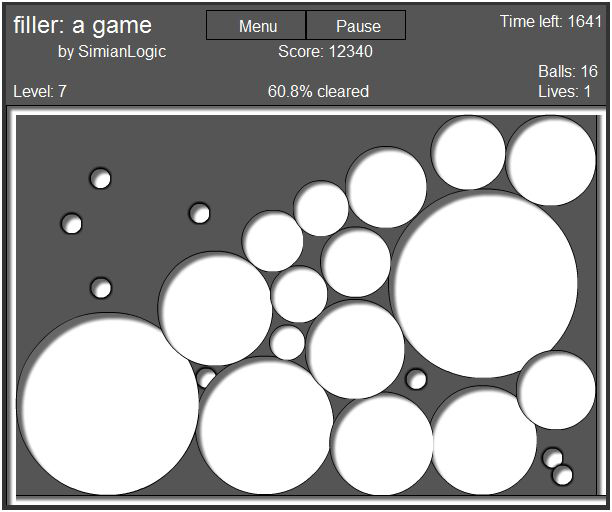 The flash games business, like the rest of the games business, is a gamble. Before a game is released, no one can predict how well it will do. Sponsorship, then, is a gamble on a gamble. Most of the games probably won’t recoup the initial investment, but the one that does can pay for the half-dozen that don’t. Now that Filler has proven to be a hit, it’s certainly a lot easier to say I made the right choice. It could’ve easily gone the other way, though–but it still would’ve been the right choice for me. This post is a little behind-the-scenes on how agonizing the decision was for me.

I was essentially “done” with Filler at the end of November–gameplay complete, only adding polish. I sent out a dozen or so emails to various portals in search of sponsorship, but I only got a few bites for less than $300–and some interest from FlowPlay, which is sort of a separate deal entirely (non-exclusive, closed-site version). HallPass also said they’d be interested in a non-exclusive version if my future sponsor allowed it. After giving various portals a week or so to respond, I posted the game to FlashGameLicense. Another week went by. Finally, an offer came in for $1500. $1500! I won’t say who it’s from out of respect, but let’s just say I was ecstatic. The sponsor had some great feedback on the game, and I was stoked. Christmas was fast-approaching, and I wasn’t in much of a hurry to finalize anything, so I kept tinkering. BigFishGames gave me another non-exclusive offer, bringing my non-exclusive offer total to three. It was at this time I asked what the $1500 sponsor’s terms included–would I get to take these other offers as well? The answer was no.

This is what I like to call "agonizing dilemma phase #1." Take $1500 up front–a fantastic offer–or speculate on future profits. I worked up dozens of success-cases: total failure, not-so-good, average, success, smash hit. I didn’t really have any solid numbers, so mostly I was just projecting what type of income I might get from MochiAds and combining that with the three non-exclusive offers on the table. I thought 500,000 gameplays over the next couple of years would be average (for an “okay” game, but not a hit), which would work out to around $250 from MochiAds at current rates. I was estimating that my Mochi/non-exclusives would conservatively net me around $1000, but with the potential for a lot more. Furthermore, I was banking on the ability to swap out my own ads for future games in place of the MochiAds for each successive release. I told the sponsor I was having doubts… and remarkably they upped their offer to $3000.

This is what I like to call "agonizing dilemma phase #2." I just got out of grad school last May–with all sorts of fun student loan and credit card debt in tow. $3000 up-front was really REALLY tempting. There were parts of the offer that I didn’t like, though. Any contest winnings (at say, Kongregate) would’ve gone to the sponsor (though there was revenue sharing once they recouped their $3,000). More importantly to me, all "profiled" submissions (Newgrounds, Kongregate, etc…) would’ve been done by them. This makes sense anywhere revenue-share is in place (such as Kong), but I just wasn’t sure I could stomach anyone submitting a game on my behalf–when I could take credit for it myself. This, eventually, was the reason I turned down the guaranteed money.

Shortly after the $3000 offer, I got another offer for $2000–thus launching "agonizing dilemma phase #3." Again, this was an exclusive sponsorship. I would’ve kept all credit and contest winnings, though, so I actually considered this offer superior to the $3000 offer. I was still home at that time, and my mom sagely advised me to “Take the money and run!”

I couldn’t do it, though. The three non-exclusive offers had completely poisoned me against taking an exclusive offer. I just couldn’t justify leaving that money on the table to take a fixed sum. Even if I could never build up to $2000 or $3000, I decided the potential MochiAds return, the right to maintain total distribution control, and the ability to plug all future games (possibly building my own ad network across two or three games) were enough to convince me that exclusive sponsorship wasn’t for me. I was prepared to release my game sponsor-less until, at the last minute, Kongregate offered a non-exclusive sponsorship. The money was considerably less than the other two offers, but the terms were the most favorable–the ability to sell site-locked versions to other sites, and the ability to keep MochiAds. What they seemed most interested in, then, was one week of exclusivity (which paid off extremely well for them) and the fact that their branding would be prevalent on all of the bottom-tier portals (those without the resources to negotiate site-locked, ad-free versions)–which generate the majority of a game’s traffic anyway. Sold!

I released Filler one month ago ago today. As I mentioned in my last “success story post,” it promptly got Dugg and drew a whole ton of attention. Because of the exposure the game got from Digg, I’ve already shipped EXTRA non-exclusive versions of Filler to BubbleBox, ArmorGames, and AddictingGames–along with the originally-agreed-upon HallPass, FlowPlay, and BigFishGames. A version for Meez should ship some time this week. I’ve got two more in the works, with a third possible. The total purse for all the ones that’ve been released to date is $3600(including the sponsored version). I won the Kongregate weekly contest, and I took second in the monthly contest–which brings the total up to $4850. Those that are still pending are pretty significant chunks of change, too, but I won’t throw out any numbers until the deals are sealed. It’s also worth nothing that this doesn’t include any of the incremental revenue streams—around $300 from Kongregate and closing in on $500 from MochiAds.

Perhaps just as important–when I get ready to shop my next game around there a lot of portals that will be listening eagerly. Because of the embedded link back to my blog, I’ve seen traffic shoot up (though nothing crazy). I was averaging a whopping 10 visits per day before I released Filler, and that’s up around 200/day now (and growing).

The game itself crossed 1,000,000 plays in about two and a half weeks. After making it on to the front page of AddictingGames, it then got another 1.5 million plays in the next week (bringing the total to around 2.5 million at the moment).

I can only speculate on the numbers here, but it’s a fun exercise. If I asked nicely, Kongregate might give me some hard numbers–but that might take all the fun out of it. Ignoring the $300 they’ve gotten from their 50% of ad revenue (which would’ve been higher if not for the 50/50 split they offer their sponsored games), the MochiBot stats show that the game was played around 100,000 times the day it was on Digg’s main page, and 50,000 the next day. Assuming a bad conversation rate of 1.5% (or would that be good?), that would be 2250 new users. Accounting for users that never come back again, assume that the average user gives them 5 page-views a week (I actually have no idea what this number would actually be). I’m sure 1/3 of those are closer to 0 and probably another 1/3 are closer to 25 or 30. Assuming around $0.70 eCPM (they give out at least 25-50% in revenue share for game pages, but I’m figuring the home page, etc.. are all around $1), those 2250 users * 5 page-views/week would be 11,250 page-views per week. Multiply that by the $0.70 eCPM and you get a whopping $7.88. Per week. Possibly forever. I actually think this is a pretty conservative estimate, but at that rate they’d make around $400/year.

That might not sound like much, but it’s actually huge. I mostly consider a sponsorship to be the sale of the ad impressions in front of the game. All of the Digg-generated income is a BONUS on the return they were already expecting as Filler made its way around the internet. Even more important, the fact that Filler got Dugg will probably double or triple that number of eyeballs.

The Alternate Universe Where Filler Wasn’t a Success

When Filler’s one week of exclusivity was up, I was stoked to go upload it at Newgrounds. Nothing. 1,500 hits, a few decent comments, and then it passed into the black hole of unlimited content. If not for me getting on Digg through Kongregate, Filler could’ve easily passed into obscurity. I can’t say enough about the two portals which gave me exclusive sponsorship offers. I was willing to fail on this game just to learn more about the process, but if Filler had been a failure I would’ve regretted not taking the guaranteed money–and I would’ve definitely sought out both of these portals as potential sponsors for my next games. Because I have a regular job and a stable income, I could afford to gamble. If I were still a college student, guaranteed booze money for the next year probably would’ve been too good to pass up.

The downside to all this, if there is one, is that my non-game projects now seem a lot less important. I don’t see myself spending a lot of time developing my website side-projects when I don’t see as much reward in it. I’ve got three or four more games specced out and prototypes done for a couple of them, so my biggest remaining dilemma is choosing which one to do next.